The Fraser Fifield Band with the Nedyalko Nedyalkov Quartet from Bulgaria 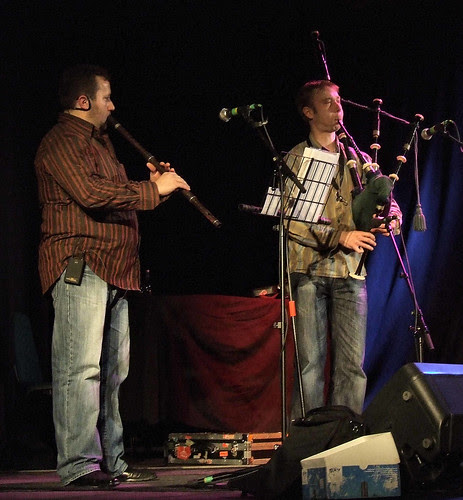 Above: Nedyalko Nedyalkov on kaval with Fraser Fifield on bagpipes.

The Fraser Fifield Band are touring Scotland just now, accompanied by the most amazing group of Bulgarian musicians, the Nedyalko Nedyalkov Quartet. I went to see them this evening, but I can't tell you where as I feel a bit guilty about taking photos after being told not to. I'm not sure why you're not to take photos - all I'm doing with them is using them to publicize the bands and their tour. I never use flash in these situations - I know what it's like standing on a stage playing your heart out and suddenly being alarmed by bright lights going off. Not fun. So I keep a very low profile, use a fast ISO setting and try to remain invisible. It almost worked. The man didn't tap me on the shoulder until near the end. If he's reading this . . . please forgive me! I enjoy these things so much more if I've got photos to remind me of it!

I've seen F.F. before, at the Edinburgh Fringe, and thoroughly enjoyed the experience, but the addition of an eastern European band made the prospect of a second visit irresistible. Did I mention I love Eastern European folk music? I think this was the first time I'd seen it live, though.

Nedyalko Nedyalkov (N.N. from now on, for brevity's sake) is an amazing player of an instrument whose very existence I was only vaguely aware of, the kaval, an end-blown flute similar to the ney, but with an enormous range, and the ability to sound like 3 different instruments within the space of half a dozen notes.

Born in 1970, N.N. is known as one of the world's top kaval players. He was already playing music at the tender age of 7 and although he started off on the accordion he soon took up the traditional kaval and spend many years developing his skills until he graduated in 1989 with high honours. He joined the Bulgarian National Radio Folk Orchestra in 1996 and still plays with them as a soloist. He seems to be internationally famous, and has played with all sorts of bands and musicians I've never heard of, but probably should have.

This guy is jaw-droppingly amazing. I've tried playing a ney - it's a very difficult technique, as these instruments are end-blown rather than transverse like our orchestral flute, or fippled, like the recorder. The kaval and its cousins are just open at the top, with an edge over which you have to blow, letting the edge cut the airstream and producing a sound. It's much harder than it sounds, and it sounds hard enough! N.N. makes it look so easy, and then his fingers start moving, faster and faster (he plays with flat fingers like a bagpipe player, rather than bent like a recorder player), and he moves seamlessly through several octaves, producing deep breathy sounds one moment and high trills the next. I was completely gobsmacked by the performance and can't do it justice with simple words. Go to his MySpace site and listen! 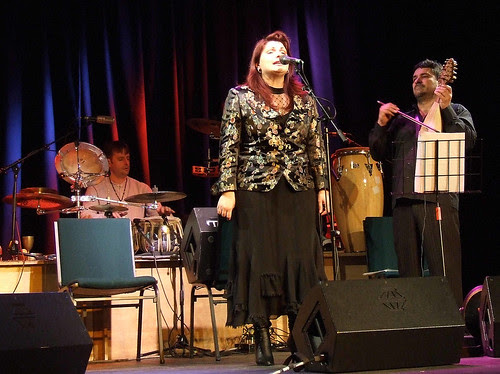 N.N.'s wife Stoimenka is even more amazing. She sings effortlessly, with ululations and microtones that sound just impossible for a human voice to produce. The melodies, so heartwrenchingly sad, almost brought tears to my eyes.

Urrr. . . Sorry . . . gotta give myself a shake here. Getting a bit carried away. But you can see, can't you, that this band are very very good. I'd gone mainly to see Fraser Fifield, who is also very very good, but I knew that already, and I know about the instruments he plays - soprano sax, low whistle, bagpipes - so, impressive though it is to see these things being played with such virtuosity, I did sort of know what to expect.

This is one of the exciting consequences of the collapse of the Iron Curtain and the introduction of Eastern European nations into the EU. We are now, at last, getting the chance to experience music that in the pre-internet past could only be heard on fuzzy, distant radio stations, late at night when dial-twiddling was all there was to occupy insomniacs. Eastern Europe is full of exciting bands who are still completely new to us - musicians playing instruments we've neither seen nor heard before, in styles we've never come across.

If you're near any of the towns on the itinerary of this tour, I urge you to go and see them. Check it out here. You won't be disappointed!

Send us a message

It's about music and chairs. Saxophones and cane. Border collies and cats. Morris dancing and jazz. Folk music, songs and ceilidh dancing. Big skies and rivers and lakes and the ever present Solway. It's about mud and wind and rain and weather. It's about the fells, and the wandering thereof. Fixing instruments and weaving seats. Recorders - oh yes, don't forget the recorders. It's about making things, writing things, creating music and pictures, dancing, and occasional journeys. And watching the sky. Always watching the sky. . .

There are worse places to live